Introduction
Pura stoves were interesting wick blue flame stoves commonly used across Australia and popular in many Australian kitchens. They were similar to the Lane's Thermil blue-flame stoves that were better known.

I am aware of only about half a dozen to a dozen of these stoves left. The steel fount probably has not helped. 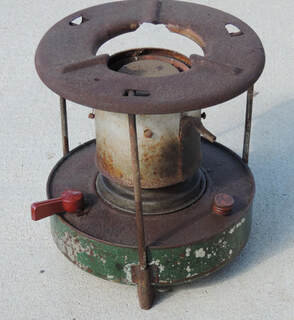 Single Burner (Small fount)
The Pura brand single burner stove has an unusual lever to raise or lower the wick. The stove was Australian made and they recommended Laurel kerosene which was Australian too. The stove is 214mm high and has a diameter of 200mm. The stove is similar in concept to the more common Australian ‘Lane’s Blue Thermil’ stove.

Double Burner (Small Fount)
​There was also a double burner version of this stove on offer and advertisements for both are between 1944 and 1946.

Single Burner (Large fount)
This is a very rare stove and only a few are known to exist presently.

Pura Metal Industries based in Melbourne was possibly the manufacturer.
References