​Introduction
Most Australian collectors have a good old Companion stove in their collection. Nothing epitomises Australian made kerosene ‘Primus type’ stoves more than the Companion 2 pint stoves. These stoves are commonly available for sale online and often get polished up, (some poorly), to try to attract a better price.

They are well made and easy to maintain. The steel trivets do tend to rust somewhat and take a while to restore. They are indeed a classic Australian stove and made from sturdy brass.

The purpose of this article is to clarify the known variations to date. In my research I have looked at many stoves in online collectors’ galleries as well as researching those that I owned including Companion blowlamps where similar features provided further guidance.

I am aware of minor variations in legs and pre-heater cups, but I consider what I have outlined in this document to be as concise as possible with the information available to-date.

History
Since the early 1940s, Companion Heaters Ltd manufactured several models of stoves and blowlamps, mostly based on licensed Swedish Sievert designs. This was because there was a shortage of Swedish stoves in Australia due to WWII. They were built to a very high standard as were the units they were modelled on.

Model Numbers
Generally, early Companion advertisements did not specify a model number for the stoves, though such advertisements may well exist. Instead they usually stated silent, roarer or even standard burner. However, a maintenance kit was clearly offered and labelled as being for the Companion Model 5. Model 1 was the roarer burner version and model 5 was the silent burner in line with traditional numbering of these stoves.

Companion brochures and instructions also regularly mentioned the models by name as Model 1 or Model 5. Companion also stuck to the model numbers used by Sievert in respect of their stoves and blowlamps that were replicated by Companion.

General Stove Description and Features
The Companion model 1 and 5 stoves are a standard Primus like, brass constructed, tri-legged upright stove with a steel trivet. Their flattened cylindrical founts have the words “COMPANION STOVE’ prominently stamped into each on the top flat surface. Each stove has a pump built in and a filler cap combined with an air release screw. Two types of air release screws are known, a flat version embossed with names and a round knurled version. The legs were made of steel and generally were not detachable, excepting for the model 5C (Heater/Stove).

The approximate capacity of the stove is 2 pints. The height of each stove is about 220 mm, but I have measured occasional variance of a few millimetres. Companion stoves all have a standard looking filler cap with ‘COMPANION’ stamped on one side only. The washer inside is 23 mm (OD). Silent burners all have 8 holes evenly distributed around the support for the burner cap assembly. All pumps are similar excepting for models 5C and 5R.

Type 1 – Companion and SVEA markings (1941+)
The fount has a small logo which is NOT above the pump. The word SVEA is in the top portion of this logo.

The trivet is stamped COMPANION BRAND and SVEA PATTERN. The air screw is flat with SVEA and COMPANION embossed on opposite sides. The roarer burner itself is marked SVEA COMPANION SVEA. 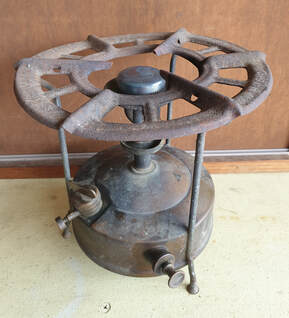 Type 3 – Round Air Screw (c 1952+)
As above but air screw is round and not labelled. Blowlamp ads have this round air screw visible from at least June 1952. (Sydney Morning Herald – 26 June 1952). The stoves were made through to around the late mid-sixties; maybe even a bit later. Some type 3 units have several ridges near feet, possibly from manufacturing. Pre-heater cups are often marked with just the word COMPANION.

However, and this is a big ‘however’, the Sievert model blowlamps (Sievert 42 and Sievert 43), that the Companion 42 (1pt) and 43 (2pt) are based upon, actually have the round air screws. Thus it is puzzling why the early Companions had flat air release screws. An aside, is the fact that the Sievert 43 blowlamp has not yet been found; only in images and documentation. Anyway, 80% of a sample of over 20 Companion blowlamps, displayed online, have the round air screw suggesting they are the later models. Additionally, all older ads show the flat air screw. 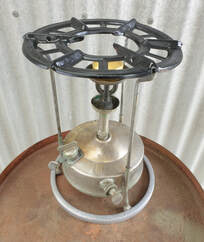 Model 5C (Heater/Stove)
Generally, taller (est 270mm high) but similar to above types 2 and 3 and with an alternative 12” reflector and heat spreader steel dome which could be fitted to change the unit into a heater.

Pump knob has an integral reserve cap for transport. Fount may be nickel plated. The rolled engraved large words on fount have horizontal etchings within letters. Legs are detachable. Obvious support ring with legs below the fount attached to the ring. Early support rings are wider. Later ones are thinner. Virtually all of these stoves have been found with the word COMPANION on the fount top having etched letters. One though has been found without. A slight variation on the narrow ring version is that some have the legs screwed to the circular base and others are permanently fixed.
Model 5R (Regulated Burner)
The Companion Model 5R ‘Regulated’ burner stove was probably made parallel to the later Model 1 and 5 (Type 3) units. The pump is plastic and the pump outlet is significantly longer than on other models, so it is quite different.

Model 52
Is a single burner stove in a range configuration with the fount on the left side.

Model 53
Is a single burner stove in a range configuration with the fount on the right side.

Model 5253
Is a joining of the two above stoves to create a double burner range.

Model 2B-1
This is a black topped and white bodied enamelled stove with two regulated burners. In my opinion, two models exist and it is my guess that the other is actually the Model 2B but this is yet to be proven though certainly two versions of this stove exist based on the internal frame and the filler cap.

​
Previous Research
A very brief history about the company was written in 2007 by Dr Peter Watchorn and is still available online.[1]

In 2015 I wrote some preliminary notes expressing my thoughts about the lineage of the Companion model 1 and 5 stoves.[2]  Note however, that in the heading for that article I used the term Companion (Svea). I now believe they are solely a Companion stove, albeit acknowledging their licensing arrangements with Sievert in their first stoves.

Similarly, an updated article about Companion blowlamps, appeared in the March 2016 edition (No 94) of ‘Blowlamp News’ produced by the Blowlamp Society.[3]