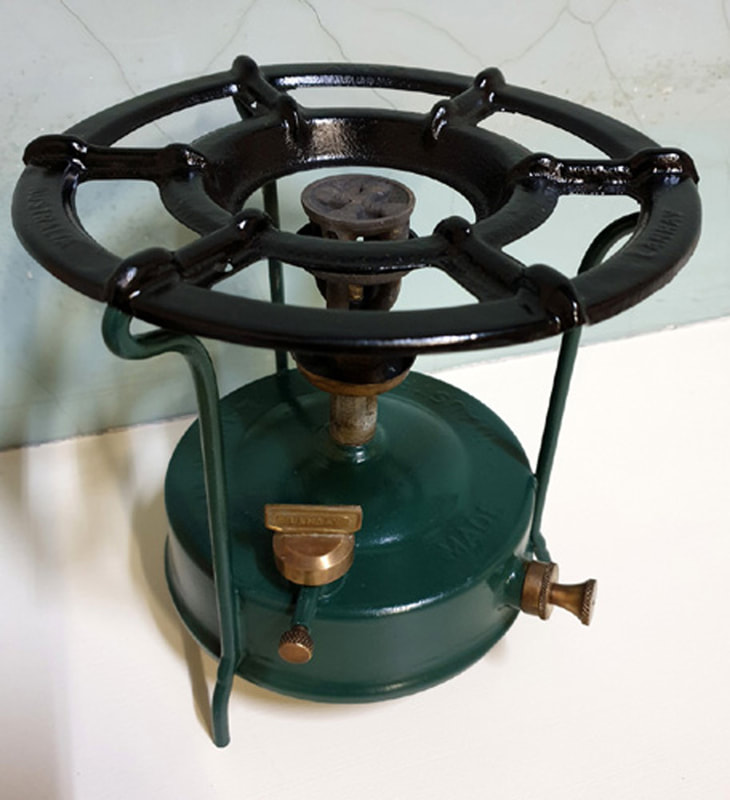 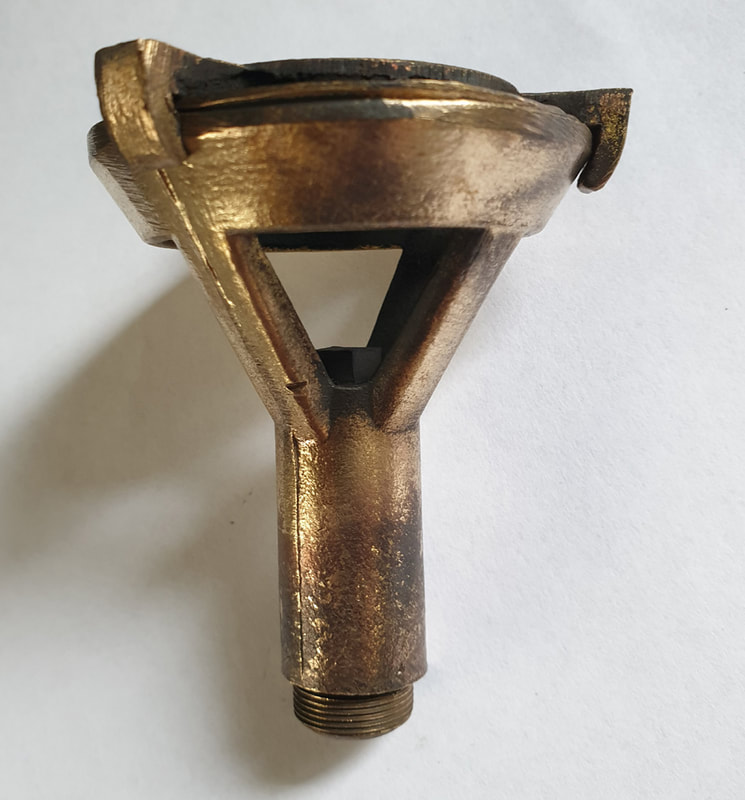 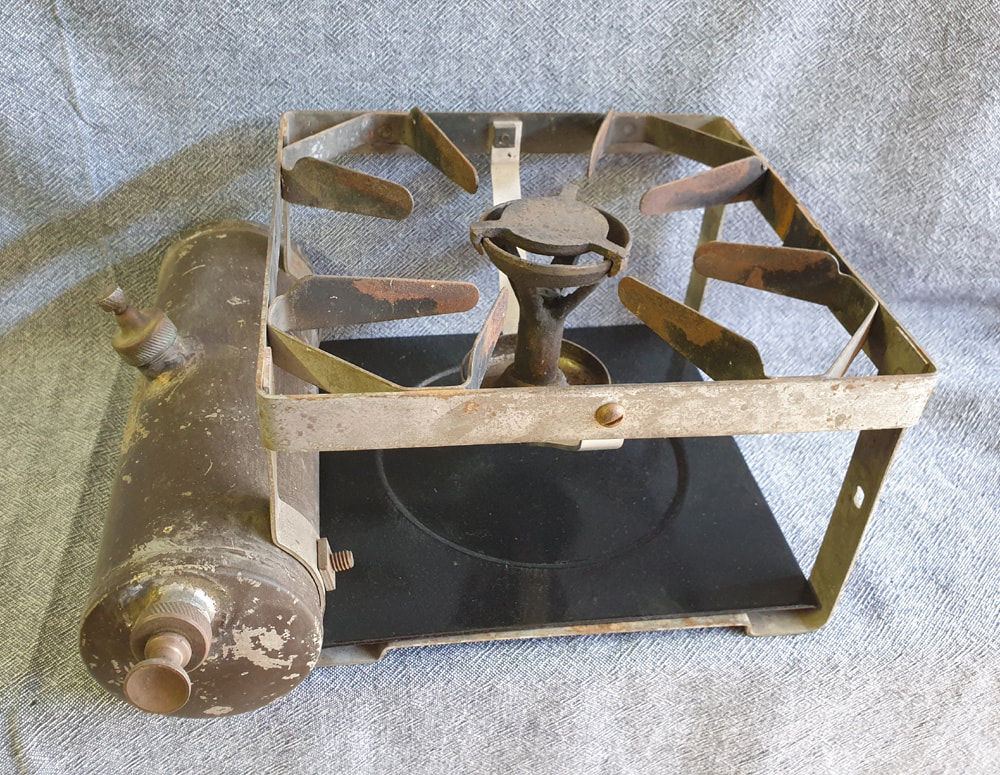 On 1st December 2014 in the Classic Camp Stoves forum I wrote a short history about Lanray stoves. A lot has been learnt since then.

More recently, whilst researching Eezy-Fyre stoves I made an astonishing discovery, that they were produced by Lanray Metal Manufacturing Pty Ltd in Sydney.

This explains the seeming lack of two burner stoves from Lanray, since it has unfolded they made heaps, but they were sold under the 'Eezy-Fyre’ brand. These Eezy-Fyre stoves probably started as war year stoves for the military and were later sold to the general public.

The following article provides clear evidence of the connection between Eezy-Fyre 'Cookers' and Lanray. (Ref: 8) 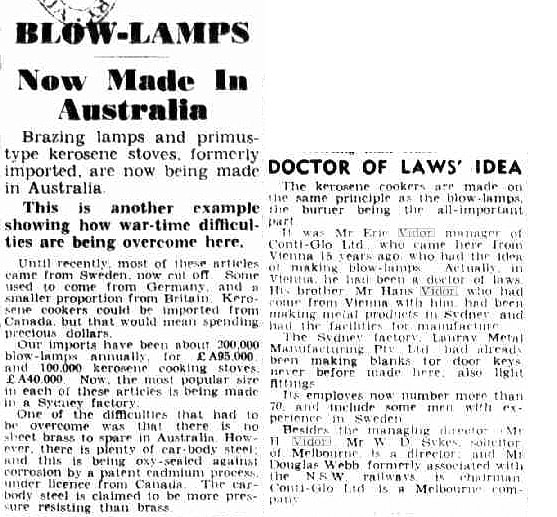 In the 1940 articles about the Vidor brothers starting up the reference to kerosene cookers is important because Eezy-Fyre stoves were marketed as ‘Cookers’; not stoves. Cookers is an unusual word, most ads back then were for stoves. The Eezy-Fyre stoves used the burner patented by Eric Vidor and the article shows that both brothers were actively involved in the manufacture of blowlamps and stoves. This was done at the Sydney Lanray plant managed by Hans Vidor. I consider that it is the evidence needed for establishing where Eezy-Fyre stoves were made. Especially since to date, Eezy-Fyre has not been found to be a company or business. The following research may prove interesting too.

In 1936 an obituary shows that a Viennese Professor Dr Armin Vajda-Vidor, had two sons; Eric in 1899 and Hans (ref: Australian Jewish Herald 19th Nov 1936). Eric and Hans emigrated to Australia about 1927 (ref: The Argus, 27 Feb 1939). Hans seems to have settled in NSW around Sydney and Eric in St Kilda, Victoria. Both were industrious and well known in the Jewish community. Eric held degrees in Law and Commerce (ref: The Argus, 27 Feb 1939) back in Vienna and he filed for a patent in March 1940 for the very clever Eezy-Fyre burner.

In 1937, a company named Lance Raymond (Victoria) Pty Ltd was established with a capital of £10,000 in one pound shares. The company were agents, importers and warehousemen. I would surmise that some of what they imported were Swedish blowlamps and stoves. The directors included Hans V. Vidor and Walter William David Sykes. (ref: The Herald, 16 Dec 1937) They were later the sole distributors of Lanray products.

An interesting aside, is that Walter Sykes, a well-known Melbourne solicitor, undertook an extensive visit to New York in 1945 where he made a ‘close examination’ of the new anti-defamation laws making it illegal to discriminate when hiring employees on racial or religious grounds (ref: The Sydney Jewish News,  8th June 1945). In that article they refer to him as a director of Lance Raymond Pty Ltd.

In November 1938 a company named Conti-Glo Ltd was also formed with a capital of £100,000 in one pound shares, to obtain the rights from a private company Conti-Glo Pty Ltd,  to a process for making signs and posters luminous (ref: The Argus 25th Nov 1938).  Eric Vidor was appointed as managing director of that public company in February 1939 (ref: The Argus, 27th Feb 1939).

In The World News (Sydney) on 2 August 1941 the following news shows the stoves were not yet being made.

Lanray stoves were advertised for probably the first time, in the Riverina Herald of 24 December 1941. (Ref:7) 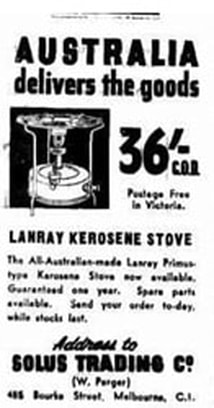 Whilst WWII promoted industrial development in many areas there were many restrictions placed on goods. Many required permits or coupons in order to buy them. In 1943 permits were still required to obtain stoves in Australia. (Ref: 6) 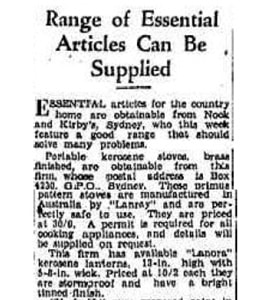 In 1946 it was noted in export manifests that Lance Raymond Pty Ltd exported 3 cases of blowlamps to India. (ref: Daily Commercial News and Shipping List (Sydney, NSW : 1891 - 1954), Tuesday 27 August 1946, page 2). This was not an isolated event but I have included it here to show the diverse places they dealt with.

In 1947 Lanray Industries Ltd was formed and this public company had three subsidiaries:
In 1947 the Australian Postwar Reconstruction Minister Dedman announced new factories at the old Villawood wartime explosives factory grounds in outer Sydney. One of these was one for Lance Raymond Pty Ltd for producing plasticised textiles. (ref: Sunday Telegraph, 19th Oct 1947)

In 1949 Lanray Industries Ltd also made pressure cookers that were popular and one existed in my parent’s home for many years. (Ref: Australian Women’s Weekly 28 May 1949)

In May 1951 the books for Lanray Industries Ltd were closed for 4 days, possibly a sign of things to come. (ref: Sydney Morning Herald 20 April 1951) 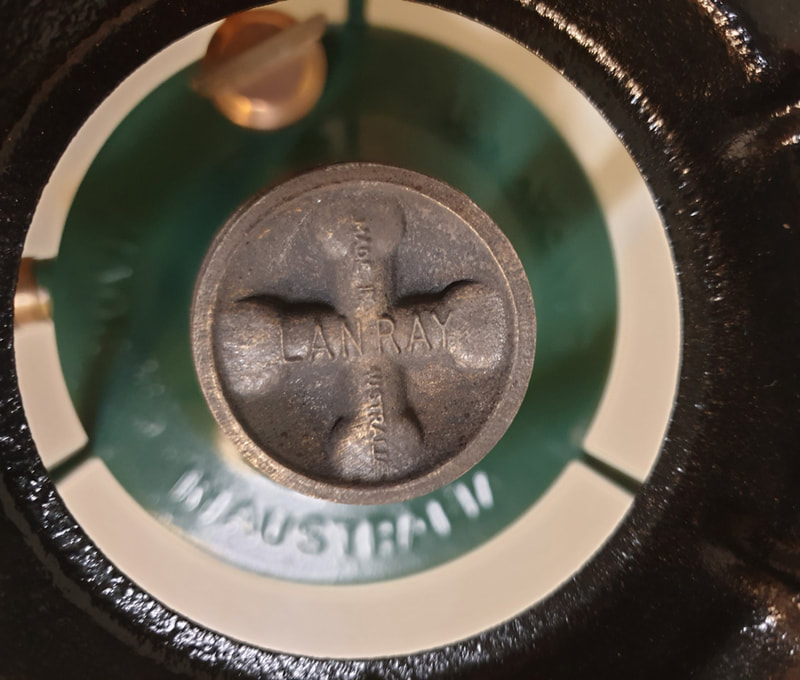 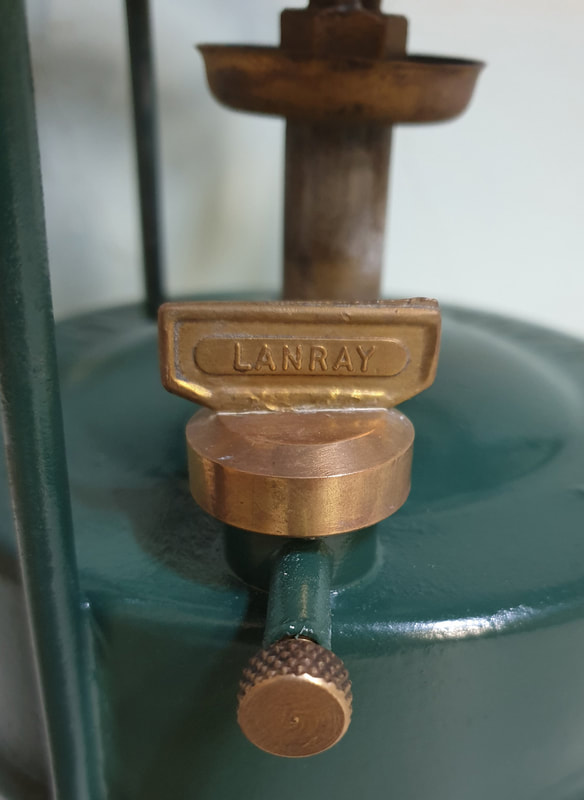 These ‘Primus' like 2 pint stoves were made in Australia by Lanray Metal Products Pty Ltd, later a subsidiary of  Lanray Industries Pty Ltd. They came with either a roarer or silent burner. The roarer burners were clearly marked ‘Lanray’ and ‘Made in Australia’. The start date for silent burners is unknown but they and the ‘noisy’ burners (Lanray No 5) were both advertised on a regular basis during the stove’s production run. In Jan 1949 a stove with either type of burner was advertised ‘on special’ for 35/- with a normal price of 40/3. (ref: 1) Lanray Industries Pty Ltd made a variety of products over many years until they were delisted (ref: 2) from the Australian Stock Exchange on 1 Sep 1971. The Lanray stoves were first manufactured a little after August 1941. Prior to this date, and for a short period, presumably, the burner alone was available for 6s 11d. (ref: 3)

Specifications Lanray No 1
The pump tube, burner and filler cap are of brass construction. The stove has a common traditional trivet clearly marked Lanray. Presumably wartime stoves were often made of steel but brass stoves were available at times. Certainly a 1943 advertisement mentioned, “Portable kerosene stoves, brass finished, are obtainable…”. (ref: 6)
Lanray No 4
​Similar to a Lanray No 1 and Lanray No 5 but with removable legs. However, one theory is that this was to reduce the height of the unit for initial shipment.

Lanray No 8
This was a collapsible stove model and the burner assembly could be unscrewed. The legs were removable to reduce height in transit. 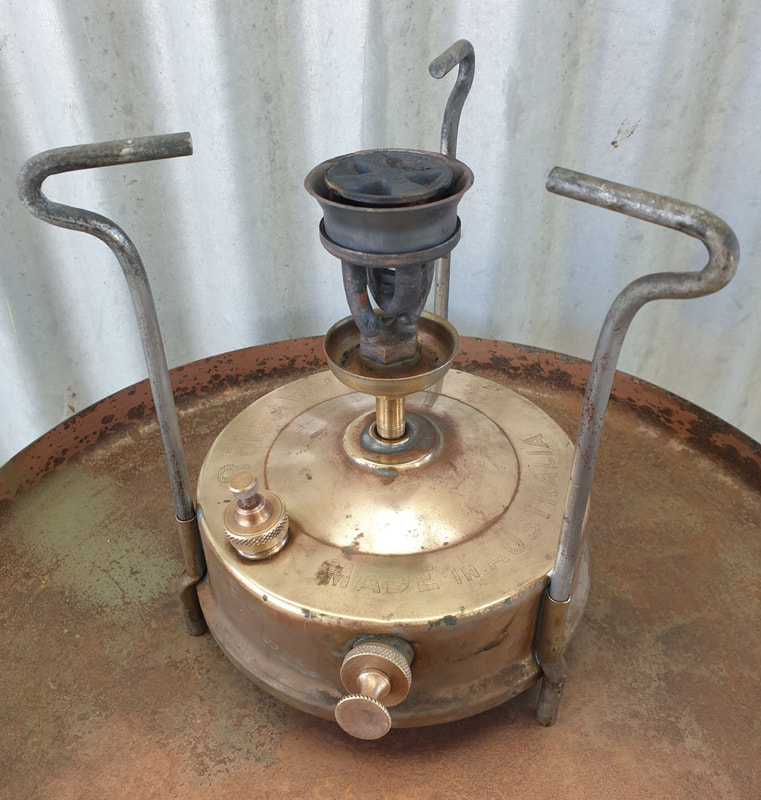 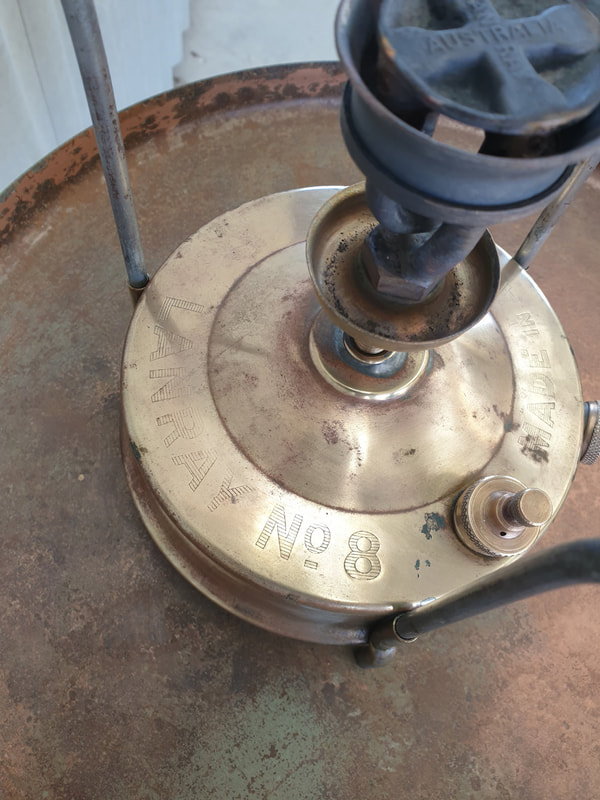 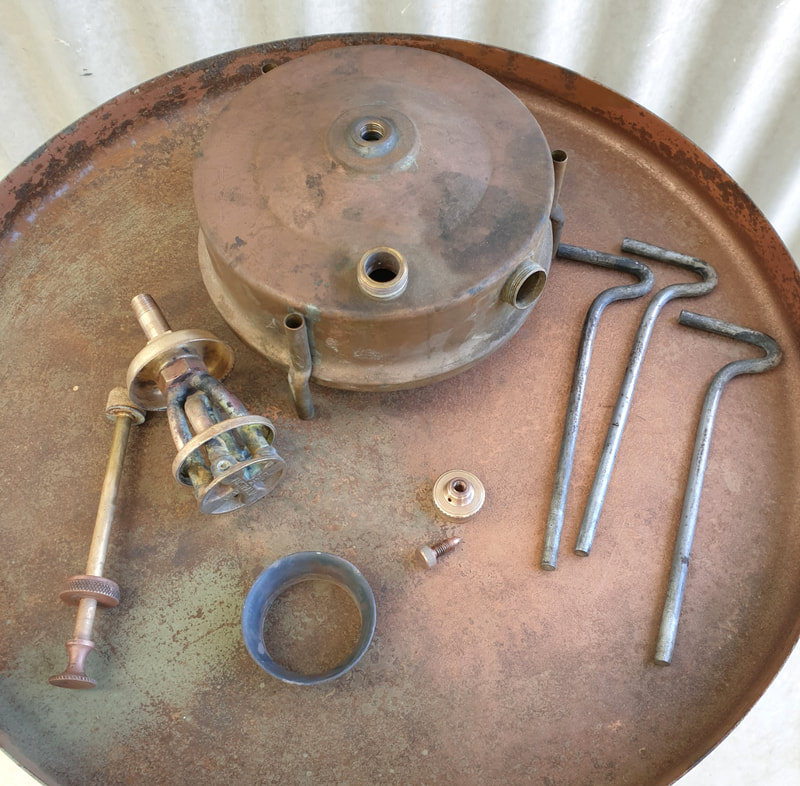 Eezy-Fyre (Single Burner - Early Type)
​This stove is the earlier version of the Eezy-Fyre stove which came with single or double burners. A removable spill tray originally brown in colour sits on the bottom part of the frame. 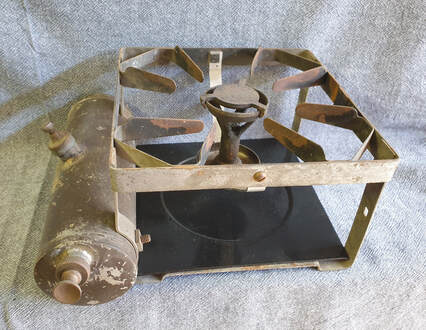 Eezy-Fyre (Double Burner - Early Type)
​This two burner model came with a pot rail for boating. The model had two different tanks for the left and right sides. 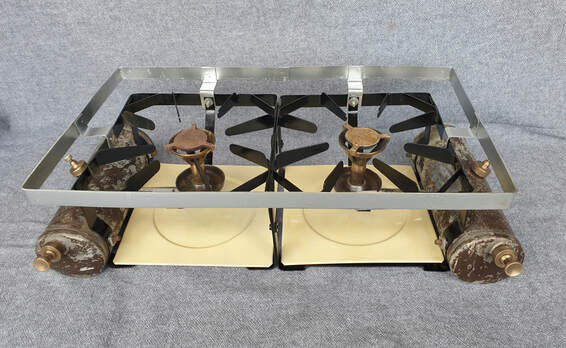 Eezy-Fyre (Single Burner - Later Type)
This model was available in the late 1940s and is easily distinguished by the pattern of holes in the range top. 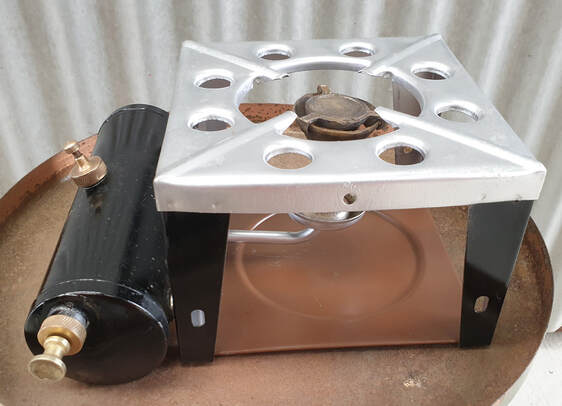 Eezy-Fyre (Double Burner - Later Type)
Similar to the above model but with two Eezy-Fyre burners. A pot rail was standard and the left and right side stoves were bolted together without a junction plate; Companion and Handi brands used a junction plate when joining stoves.

Other Products
The company was also well known also for a large pressure cooker and blowlamps. The Lanray products were solely distributed through Lance Raymond Pty Ltd of Sydney and Melbourne. This was certainly the case in June 1948. (ref: 4) The stoves were extensively advertised from 1941 through to 1949 and in 1950 a few ads usually at a ‘Special’ price appear, suggesting perhaps that the stove production had ended and some old stock was being disposed of. The company shares were closed for two days from 4th May 1951 so something appears to have befallen the company. (ref: 5)