Introduction
This popular Australian wick stove, made by Henry Lane Pty Ltd, was marketed for many years, commencing in the forties, on the principle of it being ‘Absolutely safe and silent” (Ref: a). Indeed, it was easy to use, with no pumping or priming, and it was found in many households, generally pre-electrification. The stove operated on lighting kerosene which was readily available. 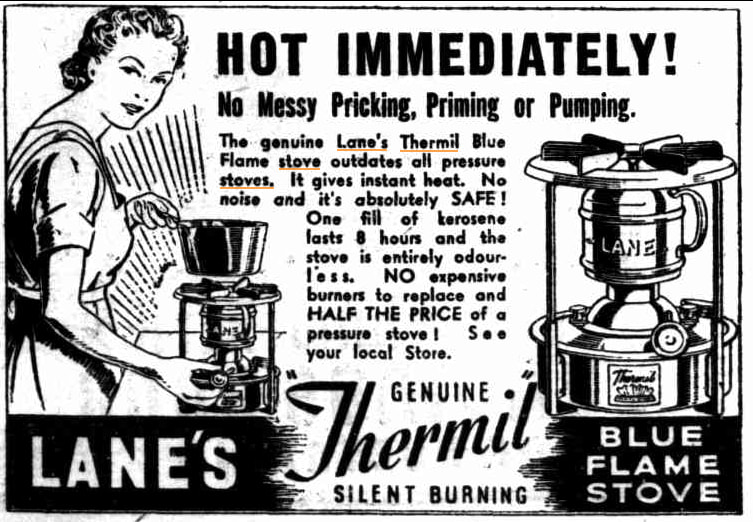 A 1941 advertisement spruiking the benefits of a wick stove.

​The Company
Henry Lane (Australia) Ltd was established in Newcastle in 1919 to make rabbit traps which had previously been imported from Henry Lane Ltd in England. At the end of World War I, the demand for traps in Australia was so great that Henry Lane moved his wire spring trap production to Australia. Once Henry had established the factory, he returned to England and sent his son out to oversee the operation. Unfortunately, his son was taken by a shark whilst swimming at Nobby's Beach near Newcastle six weeks after his arrival. There is a plaque at Nobby's Beach commemorating the tragedy. (Ref: d)

Sometime after the mid-thirties the company appears to have changed to a public company, Henry Lane Pty Ltd. During WWII Lane also kept “…the nation safe by producing fighter aircraft parts and Owen machine guns during the war effort.” (Ref: j)

Lanes were also famous not only for the Lane’s Thermil stove but also a carpet sweeper and a can opener that was widely used in Australia into the sixties. The Lane’s various companies went on to manufacture hardware and furniture fittings and locks. The Thermil trademark was not renewed by Henry Lane Pty Ltd and removed in December 1973.

Overview of Stove
The general features are a flattened cylindrical fount with a removeable cowl (‘cup’) housing two inverted cone shaped plates facilitating vaporization. The ‘long life patented wool wick’ (Ref: b), called Thermwol, (Ref: c), was woven from wool and cotton and then formed into a round type allowing air to be drawn in from below the stove via a central draft tube, similar to many lamps. A winder with a cog drive shifted the wick carrier up or down as required.
A tool was provided with each purchase to trim the wick and remove any to allow for removing gritty bits of the wick if it got out of shape.
Model 50 standalone stoves had 3 steel legs, early ones straight and later ones angled. 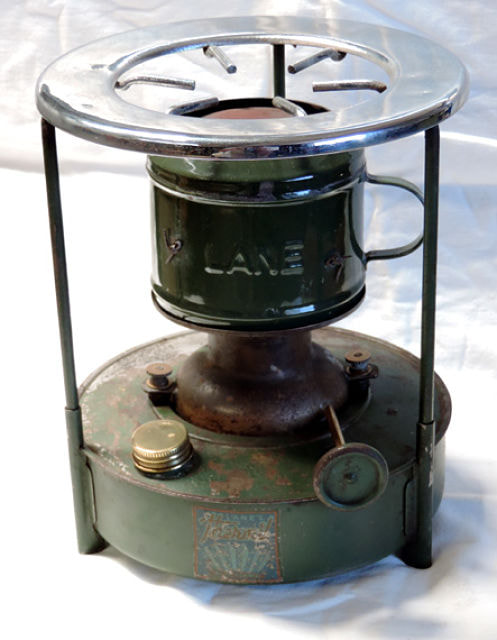 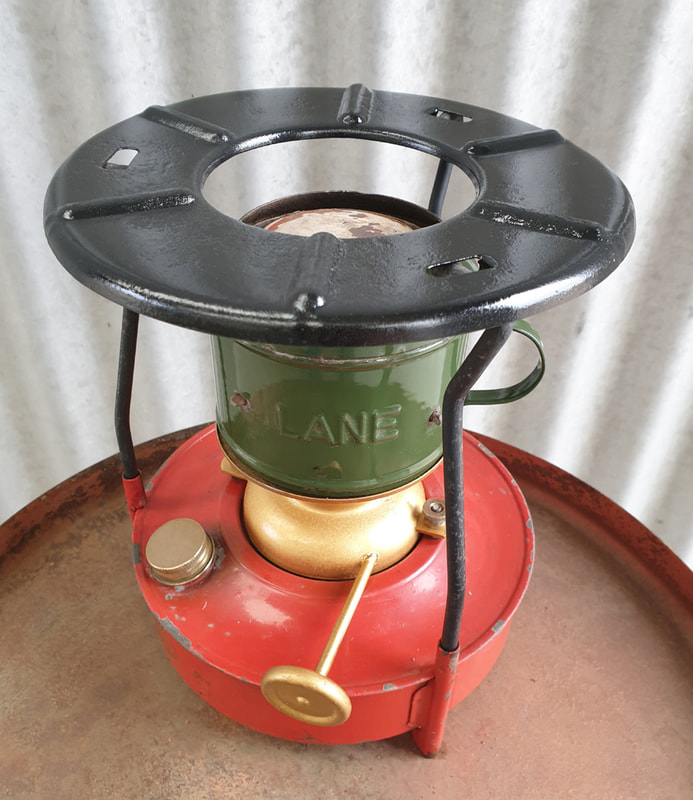 A trivet completed the unit. A series of ranges, being simple frames that could hold 1, 2 or 3 stove units without legs complimented the range. Two ovens were also manufactured. 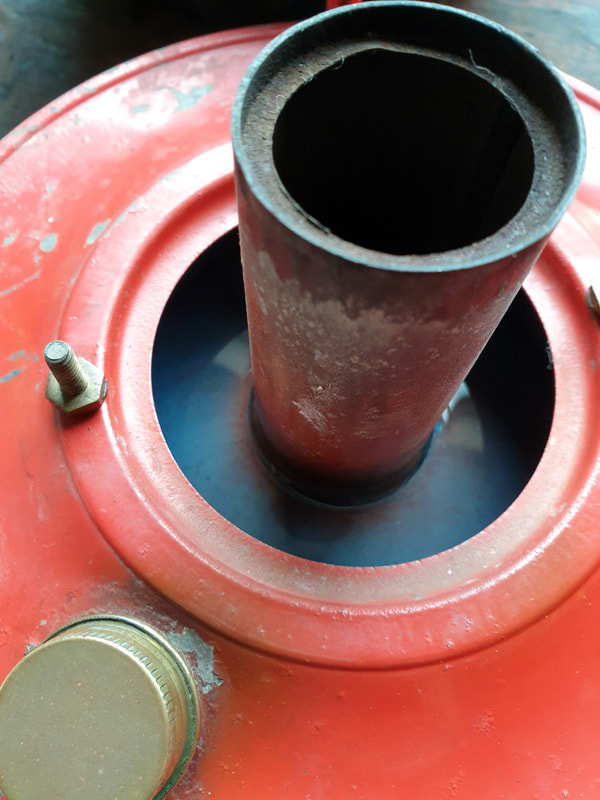 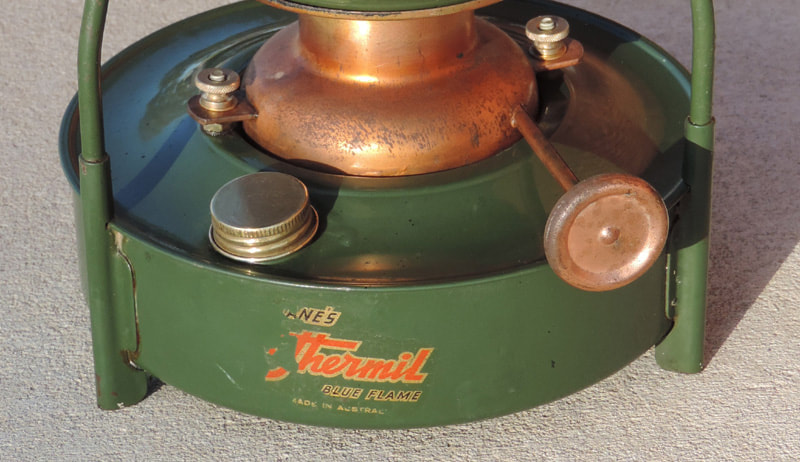 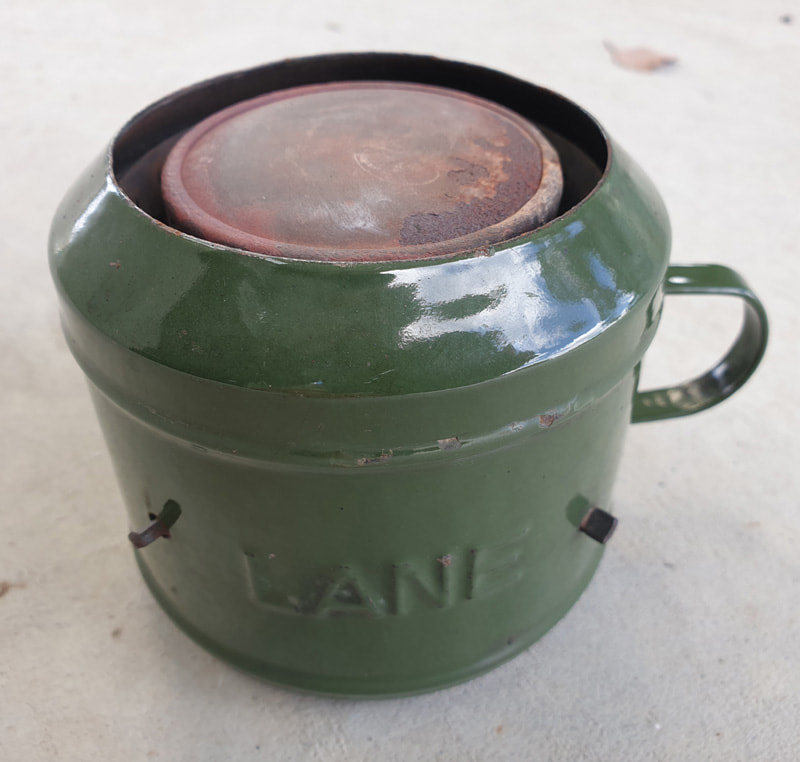 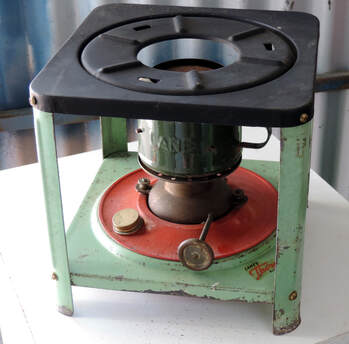 Cookers Ovens Heaters Pros Cons
Questions
​Trivets
There are two types, though a third is shown in company instructions. Both of the presently known types are about 200 mm wide. The ridges trivet has 6 evenly distributed small raised ridges around the trivet. The ‘spokes’ type has 6 rods pointing inwards from the outer circle part of the trivet. Both types can occur on the ranges, e.g., Model 13/52. 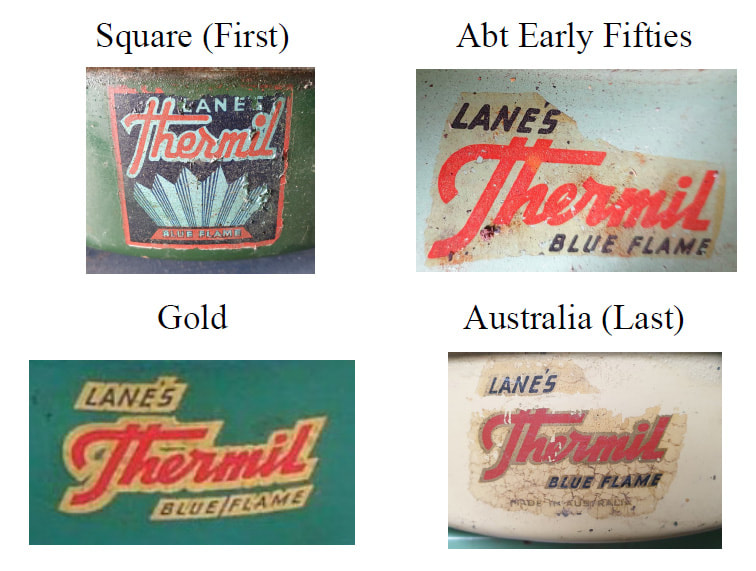 These above four logos have been seen and give an indication of the order of the stoves. The square logo seems to be the first from the early forties. The ones with Made in Australia appear to be the last used. The ‘Gold’ one I am not certain but suspect it is second last. The one labelled ‘Abt Early Fifties’ is clearly on two dated stoves; one from 1951 and another from late 1952 or early 1953 but clearly it’s use could go back into the late forties. So, until more stoves arise with proven dates it’s probably close.

Colors
The most common fount colour is dark green coupled with a dark green ‘cup’ (cowl). Indeed, many of the other coloured founts still have the dark green cowl. 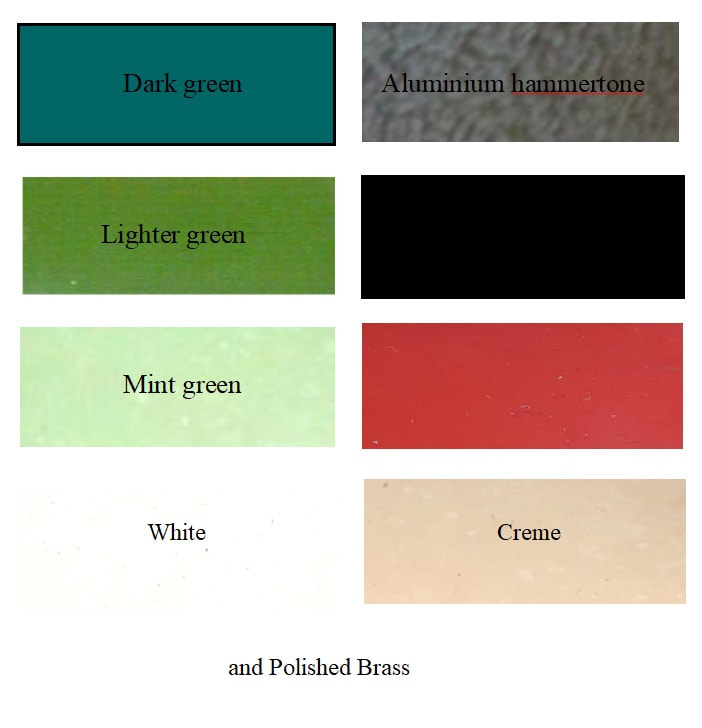 Dating Lane’s Thermil Stoves
The challenge of dating these stoves is best considered by looking at the main model 50 and the decals.

First Variation
This earliest variation has a square decal, split pins on the cowl, and straight legs. It is from the early forties. The following advertisement is from an Adelaide, Australia paper in 1941. (Ref: i) 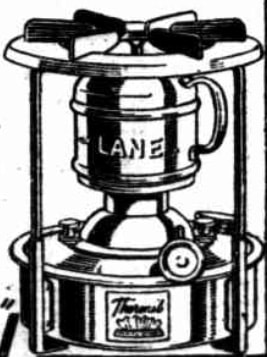 Above: First variation, though the grated trivet has never been seen, except in advertisements.

Middle Variations
They can have either the ‘abt early fifties’ decal or the ‘Gold’ decal and my belief, unsubstantiated is that the ‘abt early fifties’ decal came first. Certainly, stoves made around the period 1951 to 1953 have that decal. The early middle variations still had split pins but these seem to have changed to clips around, say 1952. The rest is hard to say for these stoves.

Last Variation
The last models are probably from the later part of the fifties. There are virtually no ads in Trove for Thermil stoves in the sixties though I have seen one dated 23 June 1961 in the Western Herald. The last variations have the decal which mentions ‘Made in Australia’ on them. There is a known ‘aluminium hammertone’ finish unit which has pre and post decimal pricing (so about 1965-66). I now feel that this is a stove sold much later than when it was made. These stoves all have clips on the cowl and not split pins. They all have angled legs too.

Price
The price in shillings of the Model 50 varied a bit. This is useful because if we know the price of a stove, we can sort of fit it into the timeline. Here are some prices and dates.
References
(a) Lane’s Thermil Blue Flame Cooking Appliances and Model 50 Spare parts brochure.
(b) Long life wool wick in brochure, https://classiccampstoves.com/threads/lane%E2%80%99s-thermil-blue-flame-stove.43744/
(c) Kopsen produced pamphlet that included the Thermil range.
(d) Museum of Applied Arts and Sciences, 'Ace' rabbit trap made by Henry Lane (Australia) Ltd
(e) https://nla.gov.au/nla.obj-151651032/view
(f) Advertisement in Northern Star, 30 May 1946
(g) Advertisement in Cairns Post, 2 January 1954
(h) Advertisement in Daily Advertiser, 21 July 1952
(i) Advertisement in Chronicle, Adelaide 12 June 1941
(j) https://www.itwproline.com.au/trends/lane-100-year-journey/
extracted 3 Feb 2021